skip to main | skip to sidebar

Barron Barnett Lodge of Research No.146 UGLQ, was consecrated on 15th August, 1903. It was the first established and only remaining, warranted research lodge of the United Grand Lodge of Queensland. 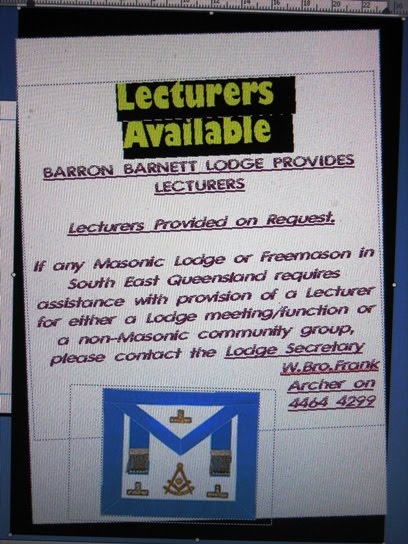 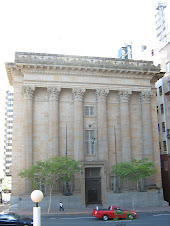 Barron Barnett Lodge of Research was consecrated on the 15th August, 1903.
It was consecrated by the District Grand Master R.W.Bro.Gregory of the District Grand Lodge of Queenland, English Constitution.
District Deputy Grand Master R.W.Bro.Barron Barnett not only participated in the consecration but also became the Foundation Master and eponymous namesake of the Lodge.

According to R.W.Bro.Ken Wells who prepared a history of Barron Barnett Lodge in 2003, the first critical resolution submitted to the meeting in 1903 by R.W.Bro.Alexander Corrie was that “It is expedient to form a lodge and to present a petition for a Warrant”. It was seconded by W.Bro.J.D.Reeve.

Lodge Consecration:
In short order, on Saturday 15 August, 1903, five days after the original meeting, Barron Barnett Lodge No.3011 English Constitution, was duly consecrated and dedicated by the District Grand Master, R.W.Bro.Augustus, Charles Gregory, Deputy District Grand Master, Barron Lewis Barnett and Grand Officers. Indeed, many members of the Board of General Purposes were present and became foundation members of the Lodge.

Notwithstanding the proposed Lodge names mentioned in R.W.Bro.Ken Wells' 2003 history of Barron Barnett Lodge, in a 1979 biography of Barron Lewis Barnett, W.Bro.N.E.Booth stated that the new lodge was to be called the Lodge of Installed Masters, Warrant No.3011, United Grand Lodge of England.

Whatever the truth of these varying records, and they are not mutually exclusive, both writers agree that the foundation members of the Lodge unanimously agreed to change the planned name to Barron Barnett Lodge in recongnition of the great service given to Freemasonry in Queensland by R.W.Bro.Barron Barnett.

Uniquely, R.W.Bro.Barnett not only officiated at the consecration of his eponymous Lodge but was also its first Master.

No posts.
No posts.
Home
Subscribe to: Posts (Atom)

Portrait of Barron Barnett from the foyer of Lodge Room No.4, Masonic Centre, Ann St., Brisbane